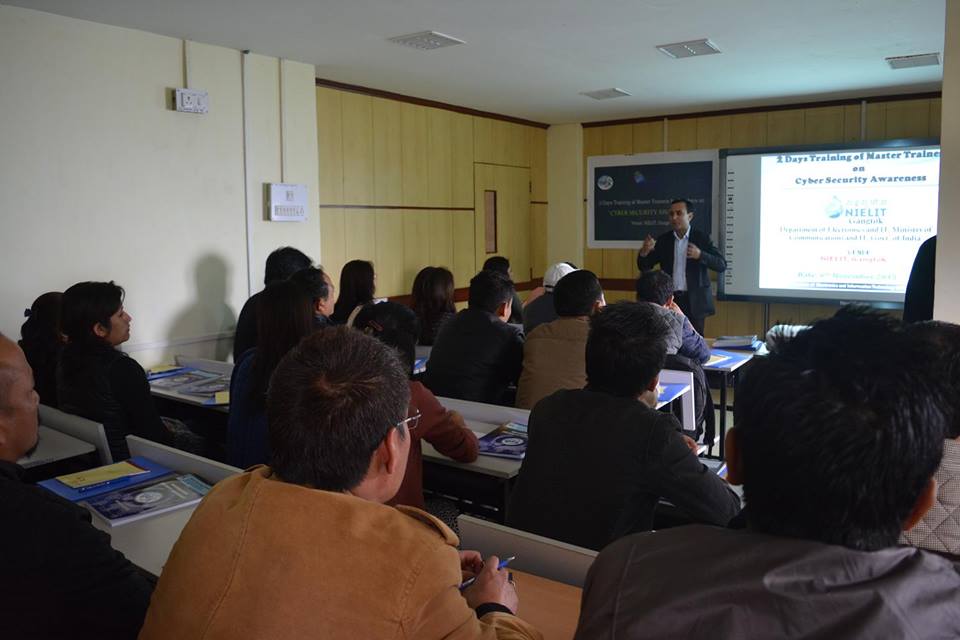 National Institute of Electronics and Information Technology (NIELIT), Gangtok conducted a two days Master Trainer Training program for School Teachers on Cyber Security Awareness on 6th and 7th November 2015 at its premises located at Sichey, Gangtok. A total of 35 nos. teachers belonging to schools from the 4 districts of the state were nominated by the Human Resource and Development Department, Govt. of Sikkim for undergoing the training program. The training was conducted as part of the Cyber Security Awareness project sponsored by Department of Electronics and Information Technology (DeitY), Ministry of Communications and Information Technology, Government of India which is being executed by NIELIT, Gangtok. The project deals with creating mass cyber security awareness among schools, colleges and government employees through appropriate training and campaign mechanism.

The training was inaugurated by Shri Khagendra Sharma, Scientist-C, NIELIT-Gangtok who emphasized on the need for cyber security awareness amongst the staffs and students to avoid cyber crimes and asked the participants to make full use of the training program so that they can function effectively as trainers at their respective schools to spread the awareness for creating a healthy cyberspace.

The technical team comprising of Project Assistants of NIELIT,Gangtok and headed by Shri Khagendra Sharma covered topics ranging from Internet, Cyber Ethics, Cyber Crimes and Attacks, Internet Threats, Safety and Security measures by quoting examples from within and outside the state.

A total of 41 nos. workshops have already been conducted between March to August this year by NIELIT, Gangtok with the support of HRDD, Govt. of Sikkim which includes 29 schools, 8 colleges, 3 ITIs and 1 polytechnic of Sikkim.